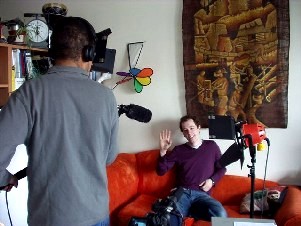 Logline: Would you buy anything from this man? Can you believe what he has to say? Find out in 12 minutes…

Synopsis for “THE SALE”

‘The SALE’ is a short film showing a successful sale by Matthew, a salesman on the phone with his prospect, Jane. A thoughtfully written script ensures you need only hear one side of the conversation to know what has been said between him and Jane, an elderly woman Matthew met at the Ideal Home Exhibition.

Mild wit is thrown in to maintain lively dialogue. The product being sold is a home cinema system. Each objection is skilfully negotiated by Matthew and as empathy for the character increases, the conclusion reveals a twist.

When Matthew shouts out ‘YES’ at closing the sale it becomes clear that there is nobody on the other line by revealing the phone is disconnected.

Development of the Idea:

The original concept was conceived over thirteen years ago whilst addressing the issue of schizophrenia in terms of a character’s frame of reference. Several years ago the story developed around a salesman as Arbind Ray witnessed Richard, an ex-colleague at the time who used to rehearse his lines at work. In order to avoid detection by his boss, Richard would hold a telephone handset to his hear whilst learning his lines for an upcoming audition!

This gave rise to the notion of creating a piece with low production costs in mind i.e. one character, one location setting, one scene. Although similar to that of a monologue had it been written for the stage, having watched The Prime Gig, a film starring Ed Harris and Vince Vaughn, the gliding camera styles re-ignited interest in developing the idea further.

Arbind chose the home cinema system as it seemed befitting to the movie industry and his personal interest in the equipment meant he had a good grasp of the technicalities involved which would subsequently enable fleshing out the screenplay. Conversations with script writing forums like Rocliffe regarding another project resulted in toning down words which might appear obvious to very few but sound alien to the majority of viewers who are unlikely to care about the mechanics of a projection system. 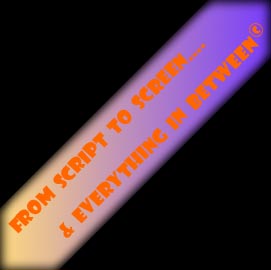 Having researched numerous brands prior to purchasing his own system Arbind realised some of the salesmen were not too familiar with what they themselves were selling. Ultimately Arbind got into salesman mode himself, demystify the product by focusing on the features and benefits and then script a two-way conversation by writing down only one side of the conversation whilst pondering over various permutations by way of responses to the questions asked. Only then was Arbind in a position to make the dialogue work.

To strengthen the piece, developing the character was the next stage before redrafting the script. Once the salesman had been labelled with a past to include a partner, possibly a child and unfulfilled dreams, it became more credible in Arbind's mind to provide personality to the character which resonated through his writing. Now you were looking at a salesman who had been incredibly successful in the past, had the requisite product knowledge and natural rapport with prospective clients. The actor was subsequently requested to bring a photo of when he was younger, possibly with another family member.

Finding the right calibre of actor to breath life into the character was the next challenge. The project needed to attract an actor who could not only learn to perform six minutes of dialogue by heart, but also have the screen presence to deliver a convincing performance. This would only work if all other mechanical aspects of the film making process were executed with due diligence. Enter Matthew Steer.

Arbind Ray at work - directing Matthew Steer
on the set of "The SALE".

Having successfully passed auditions with flying colours (after reviewing the screen tests) Matthew Steer provided the greatest degree of plausibilty to the character. Having a list of impressive credits to his name, Matthew Steer was the familiar face on BBC1's Eastenders as Matt Lindsay playing opposite Charlie Brooks (Janine Butcher) as well as ITV's The "Bill" amongst other Film, Television and Stage Acts. Most recently appearing in BBC1's Agatha Christie's Partners in Crime (2015) with David Walliams & Jessica Raine.

Multitasking proficiency in camera, editing, lighting and sound was attained with minimal crew. Shooting duration required was one day.

"When I embarked on turning this film into reality, little did I know that I would need to become Matthew. Not only has he inherited serious psychological issues, but every ounce of what he projects is identifiable. Recognisable to the point that you begin to think; Am I the character portrayed in the film? Or is this guy simply an example of what I hope never to become during my entire life!

I also wanted to highlight the subject of mental health in terms of frames of reference which is experienced by a select group of patients suffering from schizophrenia. Most of us are unable to recognise the symptoms until it's too late.

I felt The SALE would provide the opportunity where I could contribute to a project with work representing a synthesis of my practical and academic film background, resulting with a show-reel suitable for film festivals.

When you watch The SALE it will engage you to the point you experience a paradigm shift. I enjoyed creating it. Hope you enjoy viewing it." Arbind Ray